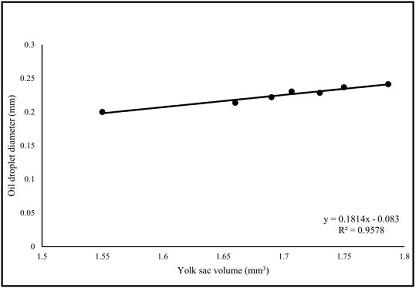 Silver moony (Monodactylus argenteus) is a native fish species of the Western Pacific and Indian Ocean inhabits coastal bays, estuaries and tidal creeks. For the Indian ornamental fish industry, this species is of paramount importance as a brackishwater ornamental fish. Therefore, the studies on salinity tolerance profile during embryonic and larval development could lead to develop standard breeding and rearing protocols for the species. In this study the development of embryonic, pre-larval and post-larval phases of M. argenteus under different salinity levels were investigated: a) to evaluate the influences of various levels of salinity (0 to 40‰) on the egg buoyancy, hatching and survival rates; b) to measure the survival rate and growth profile of larvae at 0 to 5 days post-hatch (dph) under salinity gradients (10 to 40‰) and c) to describe pre-larval (22 dph) and post-larval (32 dph) growth profile and survival rate at different salinities (0, 10, 20, 30 and 35‰). In the experiment results, the neutral buoyancy of eggs was recorded at 25–30‰. The time period recorded for the first hatching was 18–20 h at all the salinity levels. The highest rates of hatching (90–100%) and growth rates were observed at salinities from 25 to 40‰. The survival rates of 5 dph larvae (>75%) were highest between 20 and 35‰. For pre-larvae, the survival and growth rates were uppermost at salinity between 20 and 35‰. The post-larvae (32 dph) or juveniles were more euryhaline and showed higher growth and survival rates in freshwater gradient (0‰). The study directed that a higher salinity gradient (25–35‰) would be appropriate for the embryonic development and larval rearing phases. Simultaneously, soon after metamorphosis, M. argenteus preferred freshwater gradient, indicating strong euryhaline nature of the species. At the end, we suggest that the species can be reared in freshwater, brackishwater and marine aquaria, when it attains post-larval phase.