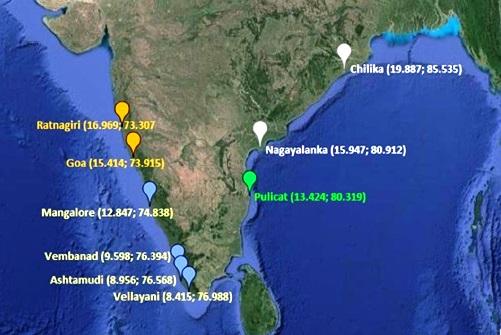 Pearlspot (Etroplus suratensis) is one of the most commercially important brackish water fish species widely found along the coastal regions of peninsular India and Sri Lanka. Pearlspot is known for its tender flesh, delectable taste, culinary tourism and high-yielding market value. Information on the genetic makeup of stocks/populations is extremely vital as it forms the basis for future genetic studies. For this, we utilized ATPase6/8 genes of mtDNA of pearlspot populations collected from nine different locations ranging from Ratnagiri in Maharashtra state on the west coast to Chilika in Odisha on the east coast. Sequence analyses of these genes revealed 33 polymorphic sites, which include 17 singleton and 16 parsimony informative sites. Pair-wise genetic differentiation study (FST = 0.75) indicated significant (P < 0.001) differences among all the pairs of stocks except those from Chilika and Nagayalanka. The spatial analysis of molecular variance (SAMOVA) significantly delineated the population into four groups (FCT = 0.69, P = 0.0001), namely northwest (Ratnagiri and Goa); southwest (Mangalore and lakes at Vembanad, Ashtamudi and Vellayani in Kerala); southeast (Pulicat in Tamil Nadu) and northeast (Chilika in Odisha and Nagayalanka in Andhra Pradesh). The above delineation is supported by clades of the phylogenetic tree and also the clusters of median joining haplotype network. The high haplotype diversity (0.84), low nucleotide diversity (0.003), and negative values of Tajima’s D (–1.47) and Fu’s Fs statistic (–14.89) are characteristic of populations having recently undergone demographic expansion. Mantel test revealed significant isolation by distance. The study identifies highly delineated structured populations with restricted gene flow. If such a stock is overfished, it is highly unlikely that it would recover through migration. For any future breeding programme in this species, it would be desirable to form a base population which incorporates the genetic material from all the locations so that we get a wide gene pool to select from.