Dr M V Gupta, the World Food Prize Laureate, presided the valedictory function of BRAQCON 2019 and stressed the creation of a separate Ministry for Fisheries in Govt. of India

The World Brackishwater Aquaculture Conference (BRAQCON 2019), inaugurated by Dr.Trilochan Mohapatra, Secretary, DARE & DG, ICAR, on 23 Jan, 2019 has come to the end in the evening on 25 Jan, 2019. The valedictory function of the conference was presided by Dr.Modadugu Vijay Gupta, the World Food Prize Laurate. In his address, Dr.Gupta congratulated ICAR-CIBA and Society of Coastal Aquaculture and Fisheries (SCAFi ) for organizing this world conference on Brackishwater Aquaculture at appropriate time. His major concern on the brackishwater aquaculture is the exclusive dependence on one single species, the pacific white shrimp, Penaeus vannamei. He highlighted that, we have not used any other species, although we have number of potential species, which could be used for enhancing production and productivity of the aquaculture sector. With regard to the issues raised and the recommendations of the BRAQCON 2019, he emphasized the organizers of the conference to identify the right institutions to take it further forward for implementing the recommendations. It is paramount for the fruitful realization of the BRAQCON 2019.

He further said, with a value of coastal and marine resources worth 28 trillion USD, the fisheries sector contributes significantly towards the livelihood for coastal communities. He mentioned, in India alone, 15 million people were directly involved in fisheries activities and many more millions are involved in other ancillary activities related to fisheries and aquaculture. Compared to the poultry and livestock industry, the fisheries sector has the lowest carbon footprint. Considering the significant contribution fisheries and aquaculture to the food security of the growing populations, he stressed the importance to create a separate Fisheries Ministry in Govt. of India, which had been promised in 2006 itself by the cabinet minister to agriculture at that time, while inaugurating the National Fisheries Development Board.

Dr. S.D.Tripathi, former Director Central Institute of Freshwater Aquaculture and Central Institute of Fisheries Education, presented the recommendations of BRAQCON 2019. He highlighted recommendations on major issues in brackishwater aquaculture related to diversification of species and rearing system, fish nutrition, biotechnology, aquatic animal health, aquatic environment and climate change, ecosystem & biodiversity conservation, and socio economic issues. Considering the domination of brackishwater aquaculture with a single exotic species, it is high time that diversification of species is the need of the hour with indigenous species such as P.indicus on a national priority.

Prof. Chris Hauton, University of South Hampton, UK expressed his happiness on the quality of presentations from successful fish farmers and scientists, and said that the problems of aquaculture were of international in nature and cannot be solved by a single country alone and that it was necessary that all concerned countries should work together to solve issues in aquaculture. He congratulated the work of CIBA, SCAFi for organizing BRAQCON 2019 which may help to get re-invigorated to address the global problems with regard to diversification, diseases, seed quality, etc., and can be resolved by working together.

Dr K K Vijayan, Director, CIBA and Convener BRAQCON 2019, expressed his happiness over the overwhelming response and support of stakeholders in making the first ever unique World Brackishwater Aquaculture Conference successful. He mentioned that this conference was conceived almost a year ago considering the uniqueness of brackishwater aquaculture niche, which has become an economic engine of the fisheries sector in the country, contributing significantly to the exchequer of the country. We organized a farmers’ conclave on 22nd January 26, 2019 as a gateway to the scientific Brackishwater conference, and made our earnest efforts to bring real brackishwater farmers from all the maritime states and Haryana, Punjab and Rajasthan to share their experiences, which were mentored by scientists of CIBA. He announced that the farmers’ conclave would be held every year at different aquaculture hubs in the country. BRAQCON 2019 considered oral and poster presentations equal and introduced new format of poster presentations in the form of e-posters. He mentioned that the recommendations of the conference will be taken to the highest concerned officials in the Govt. level for implementation. He acknowledged the support of various Govt. and private agencies in successful conduct of this mega event for first time in brackishwater aquaculture sector. He lauded the effort and work by CIBA fraternity which was highly satisfying in organizing this mega event, and hoped that BRAQCON would be held every two years now on. Earlier, Dr Alavandi, the Organizing Secretary BRACON 2019 welcomed the gathering and in the end Dr Ambasankar, Treasurer, SCAFi proposed vote of thanks. 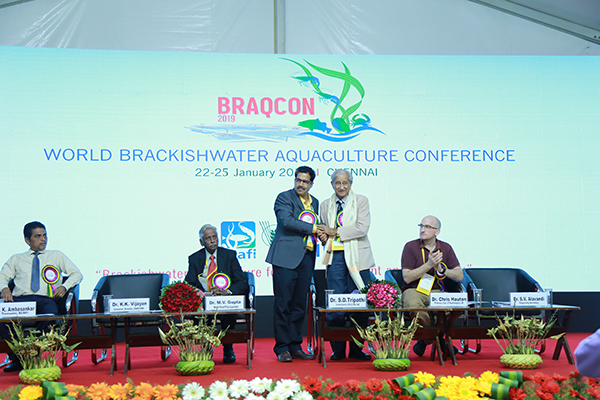 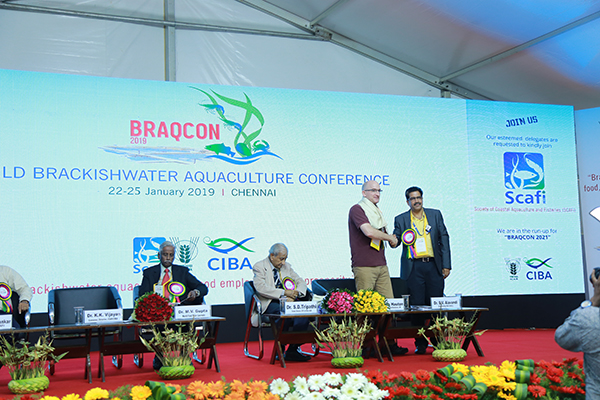 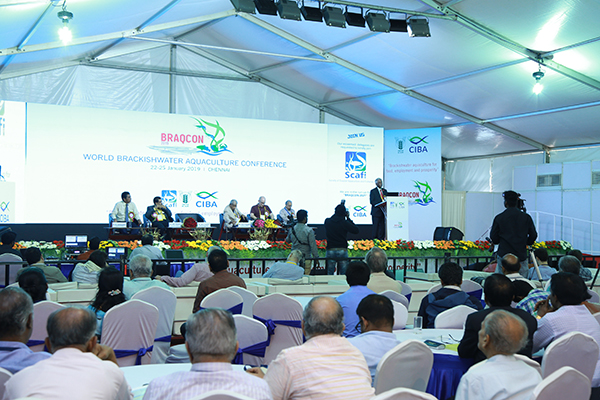 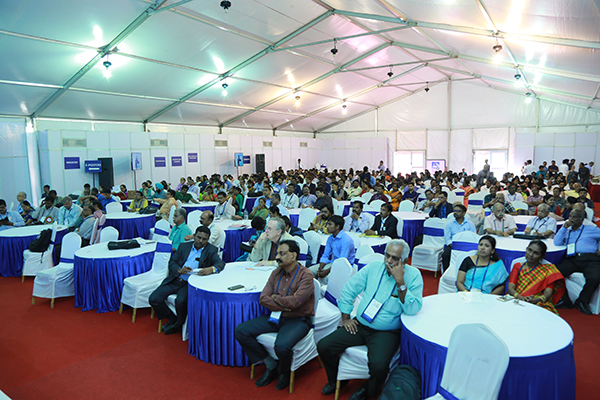