CIBA adopted farmer from the state of Odisha awarded as the best brackishwater farmer from coastal states by NFDB (DADF), Ministry of Agriculture and Farmer’s Welfare – 9th July 18

Shri. Anjan Dandapat, a progressive and innovative brackishwater farmer from Balasore District of Odisha, who has adopted the ICAR-CIBA technology in the farming of desi shrimp (Penaeus indicus), has been awarded with “Best Brackishwater Shrimp Farmer – Coastal States 2018” by National Fisheries Development Board (NFDB), Department of Animal Husbandry, Dairying and Fisheries (DADF), Ministry of Agriculture and Farmers Welfare, Government of India. Shri E. Ramesh Kumar, Joint Secretary of DADF, presented the award in the presence of Ms Rani Kumudini, I.A.S, The Chief Executive of the NFDB, at the function organised at Visakhapatnam, on the eve of National Fish farmers Day on 10th July 2018. This day is celebrated throughout India in the memory of the eminent fisheries scientist Dr.Hiralal Choudhury, who was instrumental in the induced breeding and popularising the scientific carp farming in India.

Since 2010, shrimp culture in India has shifted to the farming of an exotic American white shrimp, Peneaus vannamei. The introduction has been done to overcome the viral disease pandemic and crop failures caused by the White Spot Syndrome Virus (WSSV). This selective bred and specific pathogen free (SPF) vannamei from the USA almost replaced our native aquaculture species such as P. monodon, and P.indicus. Later rapid expansion and intensive farming of vannamei without proper scientific management practices once again lead to an outbreak of many emerging diseases like running mortality syndrome (RMS), Early Mortality Syndrome (EMS), Enterocytozoon hepatopenaei (EHP), slow growth syndrome, resulting in crop failures, making the farming outcome an unsustainable one. In this backdrop, CIBA proposed and promoted the farming of native Indian white shrimp, P. indicus, as a complementary species, for farming, in the place of P. vannamei. The diversification of farming using the desi shrimp has been conceived by CIBA as a “Make in India” programme among Indian shrimp farmers.

Through an NFDB funded project, CIBA demonstrated P. indicus culture technology for both small and large scale farming with Standard Operating Procedure (SOP), along with the six coastal states of India. Compatible a production with vannamei has been obtained with 2 to 7 tonnes/ha of indicus in four months. Production figures were impressive with 90% survival and 1.2-1.8 FCR and with proven profitability.

Shri Anjan Dandapat hails from Sahada, in Balasore District, Odisha is one of the progressive farmer practising scientific farming of indicus under the guidance of CIBA. Shri Dandapat is engaged in shrimp farming for the last 20 years with the commitment for sustainable and environmentally friendly farming. Mr Dandapat was one of the progressive farmers in partnership with CIBA who obtained a production of 3 to 6.5 tons/ha of indicus. Apart from scientific shrimp culture, the farmer is practising diversified and sustainable polyculture practices with economically important finfishes like Etroplus and Bekti through scientific interventions and modifications. Shri. Dandapat is the first farmers who initiated Penaeus vannmei farming in the state of Orissa and successfully shown the way for high density Indian white shrimp culture as a sustainable and profitable venture with technical support from CIBA. 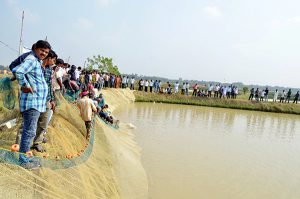 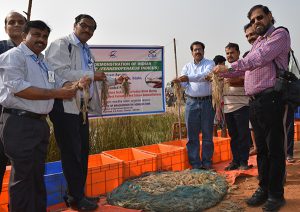