South Western Punjab in India possesses abundant resources of inland saline groundwater, similar to brackish water with salinities ranging from 3 to 15 ppt. The districts of Bathinda, Muktsar, Fazilka and parts of Mansa have regions with underlying low saline groundwater; hence agricultural productivity in this region is low as compared to the rest of the regions in Punjab owing to poor soil fertility, insufficient irrigation network and the absence of a major river system flowing through the region. Farmers in this region earn an income of Rs. 30,000 to 50,000/acre from crop-based activities based on market prices, rain and type of crop cultivated. Inland shrimp farming using the amended low saline water is an alternate farming technology option, with a crop duration of 90-120 days for doubling farmers’ income through the production of high-value shrimp along with employment generation and societal development.

In this direction with an objective of doubling farmers’ income in the region, ICAR-Central Institute of Brackishwater Aquaculture (ICAR-CIBA), Chennai successfully demonstrated Pacific white shrimp (Penaeus vannamei) farming using inland low saline water in Sangat Kalan Village, Bathinda, Punjab with M/S Blancas Aqua, Gurthari road, Sangat Kalan, Bathinda on a partnership farming mode. P. vannamei is the species of choice for farming due to its biological characteristics and the availability of inputs and package of practices for farming with ICAR-CIBA. Mr Manish Goyal and Mr Vineet Verma, two young engineering graduates from Bathinda, Punjab approached CIBA for training and input support in shrimp farming, in the early part of 2017, and were subsequently trained at CIBA, Chennai under the ARYA program on “Innovative and evolving brackishwater crustacean aquaculture” conducted by Crustacean Culture Division of CIBA during 15-27th February, 2017. As a result of the training and exposure provided, the entrepreneurs established the M/S Blancas Aqua, Gurthari road, Sangat Kalan, Bathinda for farming shrimp in Punjab. Following this, a formal MoU was signed between the parties on June 3, 2017 at CIBA, Chennai for partnership farming of vannamei in inland low saline ponds of Bathinda through technical and input support from CIBA in the form of quality shrimp seed and CIBA’s cost-effective shrimp feed Vanamiplus (at Rs. 60/Kg). The CIBA vannamei feed Vanamiplus used in this trial was specially formulated to fulfil the mineral requirement of shrimp reared in inland saline water available in this region of Punjab.

The stocking of shrimp seed in the two 4000 m2 ponds were carried out on June 26, 2017 using P. vannamei PL 13 (Avg. Length ̴7.3mm, Avg. BW ̴ 1.745±0.15 mg) sourced from a Coastal Aquaculture Authority (CAA) certified hatchery, M/S Golden marine harvest, Villupuram dist., Tamilnadu. The shrimp seed quality was subjected to PCR screening and stress tests at CIBA laboratory in Chennai prior to packing and transportation. Each of the 4000 m2 (1 acre) ponds were stocked with 1.2 lakh PL (Stocking density – 30 PL/m2) during the evening hours following standard acclimation procedure. The salinity and pH during the culture varied from 4.5 to 5.0 ppt and 8.1 to 8.9, respectively. Management of mineral supplementation viz. potassium, magnesium and other trace elements were monitored based on ionic profile of the farm by CIBA on a weekly basis. Mineral supplementation is a critical abiotic factor as the ionic profile of inland saline groundwater varies significantly from that of saline water of sea or backwaters. The shrimp attained a marketable size with an average body weight (ABW) of 20 g in a crop period of just 3 months and 26.31 g in 4 months, which falls in 36-40 count grade for shrimp with a market value of Rs 450/kg. The survival rate and feed conversion ratio (FCR) observed during the trial were 79.18 % and 1.2 respectively. At the end of 120 days of culture (DOC) in 4 months , a production of 2.5 tonnes/acre was obtained from each of the 4000 m2 ponds resulting in a productivity of 6.25 tonnes/ha. The harvested shrimp, realised a farm gate price of Rs. 320/Kg resulting in a total revenue of Rs. 16 lakhs against an operating cost of Rs. 12 lakhs, thus resulting in an operating net profit of Rs. 4 lakhs i.e. 2 lakhs/acre/crop. The cost effective white shrimp feed of CIBA, Vanamiplus which is competitively priced at Rs. 60.0 as compared to vannamei shrimp feed marketed by MNCs (Rs. 74/Kg to Rs. 88/Kg) resulted in an additional 25 % reduction in the production cost on feed, thereby increasing the profit of the farmer. The harvest of the farmed shrimp was done on October 25, 2017 in the presence of Shri. Diprava Lakra, IAS, Deputy Commissioner, Bathinda, officials from State Fisheries Department, CIBA scientists, and interested farmers from nearby villages.

This is a success story in South Western Punjab, where farmers earning a maximum income of Rs 50,000/acre, has been enhanced to 3 times, with Rs. 2.0 lakh/acre in a 4 month crop period, using technological package of shrimp farming from CIBA. Technology of shrimp farming using saline groundwater with high quality seed and cost effective desi feed has become an income multiplier for farmers in South Western Punjab. Joint efforts by the farmers, institutions such as CIBA and Government could take this model forward to contribute towards the blue revolution drive of the Indian government. However the development and expansion need to be on a sustainable mode, maintaining a balance of freshwater resource and possible issues of salinization in the neighbouring areas of the farming, through scientific planning. 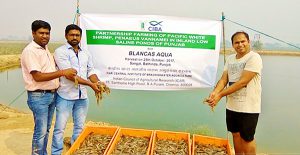 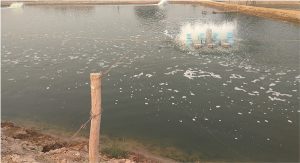 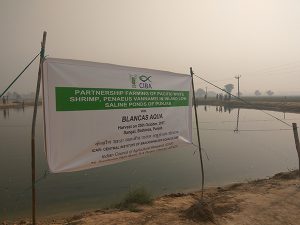 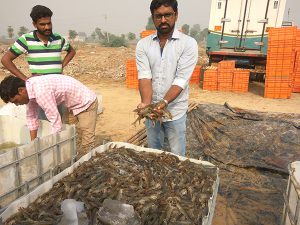