The ICAR-CIBA celebrated the “National Fish Farmers Day” on 10th July 2017 along with shrimp farmers, fishers and womenfolk of Kokkilamedu village, Kanchipuram district, Tamil Nadu. Doubling fish farmers’ income through diversification and the adoption of innovative practices was the theme of this interaction. Dr.M.Kailasam, Head-in-charge, Finfish Culture Division, narrated the success of the hatchery seed production technology of Asian seabass fish achieved by CIBA, in the year 1997. He emphasized on the importance of nursery rearing as an intermittent phase to grow the fish from fry to fingerling size and elaborated on the success story of seabass nursery rearing taken up by the fishers of Karaladibba farmers in Krishna district, as an alternative income opportunity.

The need to create awareness among school children about farming and its importance as a career option that provides food to the people was highlighted. Dr D. Deboral Vimala, Principal Scientist and coordinator of the programme explained the initiatives of CIBA taken in the Kokkilamedu village in line with “Mera Gaon Mera Gaurav” (My Village My Pride) programme. The nursery rearing of finfishes in open waters and ornamental fish farming in household tanks, which have been an alternative income generating activities for the farmers/fishers were also explained to the participants.

The CIBA scientists explained the production potential and farming practices of Indian white shrimp (Penaeus indicus) including the abilities of this desi white shrimp that can tolerate even higher salinities up to 40-45 ppt and its suitability for farming in the high saline area. The nursery rearing in shrimp farming, diseases management, soil & water management and better management practices of shrimp farming were also discussed with farmers. Importance of farmer-to-farmer communication was suggested as a better mode of transfer of technology.

The womenfolk of Thiruvidanthai village who have successfully operated the ornamental fish farming unit using the technology developed by CIBA narrated their ‘success story’ to the fisherfolk in simple language and explained the efforts taken by the CIBA in promoting ornamental farming as a livelihood development activity for them. Dr.M.Kumaran, Principal Scientist explained to the fisherfolk that their model can be emulated by mobilising fisher youths as fish farmer groups for taking up nursery rearing and farming of finfishes in cages citing the success of this initiative at Vennangupattu village in the district. He further asserted that the fisherfolk can take up coastal aquafarming as an additional and alternative livelihood activity.

Farmer-friendly publications on fish and shrimp farming prepared in the Tamil language were distributed to the participants and the fisherfolk were motivated to take up farming of fishes in the open waters available in their village. The interaction concluded with the vote of thanks proposed by Dr.R.Geetha, Scientist, CIBA. 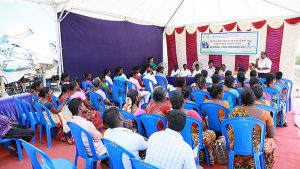 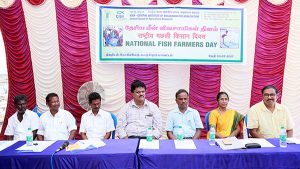