The “World Environment Day”, which is observed every year on 5th June, is an important event through which the United Nations (UN) stimulates worldwide attention on safeguarding the environment and sensitizes the governments for enhanced political attention and action towards this end. This year the theme is “Connecting People to Nature”. This theme appeals us to go outdoors and appreciate nature’s beauty and importance and take forward the call to protect the planet Earth we share. Similarly, the “World Oceans Day” is celebrated every year on 8th June as a global day of ocean conservation and responsible utilization; and the theme for 2017 is “Our Oceans Our Future”.

The ICAR-Central Institute of Brackishwater Aquaculture (CIBA), Madras Research Centre of the ICAR-Central Marine Research Institute (MRC of CMFRI) and the Society of Coastal Aquaculture and Fisheries (SCAFi), CIBA-Chennai jointly observed the World Environment Day and World Oceans Day at CIBA on 7th June, 2017 with the theme on “Life Systems in the Ocean Environment with reference to Fisheries and Aquaculture” in harmonization with this year’s themes mentioned above. Dr.P.Laxmilatha, Scientist-In-Charge of MRC-CMFRI, in her welcome address made an appeal for a clean environment and pollution-free sea, emphasising that it should be an integral part of everyone’s life agenda and family commitment. Dr.K.K.Vijayan, Director, ICAR-CIBA in his presidential address highlighted the links between the oceans, forests, rivers and human biosphere with a note that the anthropogenic activities and man-made irresponsible and greedy activities are to be curtailed to save the earth and the oceans therein from further deterioration. He explained on the positive interventions that protect the environment and at the same time to make use of the water source for food production, such as the cage farming programme taken up by CIBA in the Adayar creek with the involvement of Srinivasapuram fisher folk and Chennai River Restoration Trust for developing also as a supplementary or alternative livelihoods of the people of that locale. A quality life is the result of a healthy environment and stressed the significance of ecosystem services and sustainable way of sharing the resources for the future. He added that brackishwater and ocean are connected through estuaries and creeks which can only be used for producing nutritious fish; and mismanagement of resources break the flow and lead to the loss of these pristine natural ecosystems. He further stressed that the theme of environment and ocean day is to be remembered not as celebration only but as an everyday basis. He also emphasized that school children should be sensitized and motivated towards farming, preserving the clean environment and add to resource conservation. He gave a clarion call for contributing everyone’s might to protect the environment and oceans through convergent thinking and progressive attitude. Dr. K.Vijayakumaran, Principal Scientist, CMFRI, Chennai gave a presentation on “Sustaining the Living Systems in the Oceans” and explained the importance of oceans and its life forms in keeping the planet as a place suitable for life. He stressed that conservation of ocean resources through the actions of “catch less (fish), eat less and human population control”. During the interaction session, the participants were clarified on their doubts about maintaining a cleaner environment and oceans. He clarified the doubts raised by the audience regarding the impacts of oil spill and subsequent pollution on fishes in Chennai harbour area and stated that the recent oil spill in Chennai has not affected the fishes as they have the inherent biological behaviour of moving away from the place in the event of any such calamity, and also alerted the authorities towards developing code of protocols, preventive and restorative plans. Dr K. Ambasankar, Principal Scientist, CIBA and the Secretary of SCAFi proposed the vote of thanks. 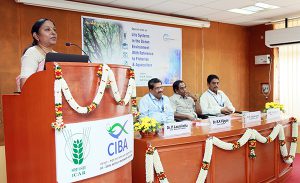 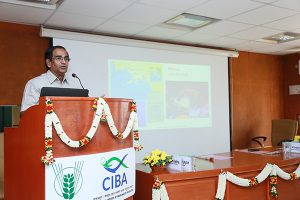 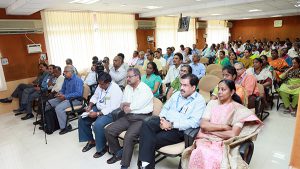 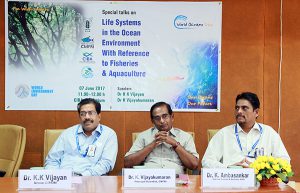 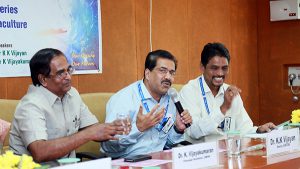 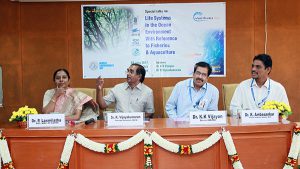