For the first time, farming demonstration trials were conducted along the selected coastal states to evaluate the performance of Indian White Shrimp Penaeus indicus under the NFDB sponsored programme “Upgradation of Breeding and Culture Technology of Indian White Shrimp Penaeus indicus through stock evaluation and culture Demonstration” research project. P indicus stocks from East coast (Odisha, West Bengal and Andhra Pradesh & Tamil Nadu) and West Coast (Kerala and Gujarat) were procured, transported and quarantined and utilised for breeding. The WSSV free seeds produced therein were evaluated through this culture demonstration that was carried out under monoculture/polyculture mode in six locations of different coastal states. Presently, Indian shrimp aquaculture involves mostly a single exotic species, the SPF Pacific whiteleg shrimp, Penaeus (Litopenaeus) vannamei . Among our candidate native species, Indian white shrimp, P. indicus can be the choice of species to be promoted as an additional native species along with the exotic species. To assess the performances of P. indicus in terms of growth, productivity and disease occurrences in comparison to P. vannamei, farming trials of indicus have been undertaken during the last two years under a National Fisheries Development Board (NFDB) funded project at CIBA Chennai. In order to exhibit the results of the demonstration to the shrimp farmers and other stakeholders and promote P. indicus as an additional indigenous species for diversification of shrimp aquaculture, ‘Harvest mela and Farmers meet’ were conducted at various locations where field demonstrations were taken up.

Farming demonstration at Balasore, Odisha during July to November 2016

The grow-out culture demonstration of P. indicus was carried out at a farmers’ pond (Dandapat Aquatics), Sahada, Balasore, Orissa. Shrimps were stocked at two stocking densities, 10 and 35 pcs/ m2 in earthen ponds of 2600 to 4000 sq.m, respectively, and farmed on a bio-secured zero water exchange system. Salinity during the culture period ranges from 2-12 ppt. Shrimps were fed with CIBA’s formulated feed ‘Indicus plus’ with 35% protein. At the end of 130 days of culture period, a final body weight of 28-30g was recorded at lower stocking density of 10/m2, whereas at the higher stocking density of 35/m2, a final body weight of 17-20 g was recorded. A production up to 4.5 to 5 tons/ ha was obtained in high stocking density ponds. The farm gate price received was Rs 430/- per kg for larger sized shrimp (28-30g) from low stocking density ponds and Rs 330/- for smaller sized shrimp (17-20 g) from high stocking density ponds. The harvest cum farmers meet at Odisha was attended by large number of farmers to the tune of 500 plus.

Farming demonstration at Kakdwip, West Bengal during July to November 2016

At Kakdwip from July to Nov, 2016. Seeds were stocked at a density of 25 pc/ m2 in two ponds and reared for 120 days based on bio secured zero water exchange system. These shrimp were fed with indigenously developed CIBA feed (Indicus plus with 35% protein). After four months rearing, an average body weight of 18-20 grams with a production of up to 3.08 tonnes per ha and a survival up to 75 % was achieved in spite of low saline conditions during culture. The performance of indicus up to 18-20 g is at par or better than vannamei. The culture demonstration of Indian white shrimp registered a comparable growth to that of Pacific white shrimp L. vannamei (16-17g) farmed alongside the Indian white shrimp. However, growth was affected by low temperature and salinity in the latter part of the culture. The harvested shrimp fetched a market price of Rs 330/ per kg at Kolkatta, West Bengal.

Entrepreneurs and officials from MPEDA, NACSA and Department of Fisheries, and representatives from other ICAR institutes also attended the harvest. The Odisha farmers showed interest in the farming of indigenous shrimp. In the interaction session at West Bengal and Odisha farmers and State officials discussed the culture technology for indigenous candidate species, with the scientist from CIBA. Addressing the large gathering of farmers, Dr K.K.Vijayan, Director, ICAR-CIBA emphasized the urgent need to promote the farming of native indigenous species along with the exotic vannamei. He praised the entrepreneurial attitude of the West Bengal and Odisha farmers in the progress of aquaculture development in the state. Dr V. V. Sugunan, the Chief consultant of NFDB, expressed the significance of the introduction of an indigenous species like Indian white shrimp. Dr B. K. Das, Director ICAR-CIFRI. Dr U. C. Mohapatro, Deputy Director from MPEDA complimented CIBA for the development and transfer of sustainable technologies. Dr Akshaya Panigrahi, Principal Investigator of the project said that the performance of Indian white shrimp is comparable to the exotic SPF vannamei shrimp and holds great potential as an alternate species of shrimp for coastal aquaculture in India. This demonstration highlighted the potential for the standardization of Indian white shrimp, endemic to the Indian coast for upgradation of breeding and seed production through stock evaluation programme.

The indicus and vannamei harvest mela and Brackishwater Farmers’ Meet at West Bengal was organised on 28th November 2016 at Kakdwip Research Centre (KRC) of CIBA, Kakdwip. The programme started with witnessing the harvest of P. indicus and P. vannamei from pond culture. The Farmers’ meet was at West Bengal presided over by Dr. V.V. Sugunan, Senior Consultant, NFDB, Hyderabad. Dr. T.K. Ghoshal, Officer-in-charge, KRC of ICAR-CIBA welcomed the guests and farmers. Among the distinguished guests, Dr. B.K. Das, Director, ICAR- Central Inland Fisheries Research Institute, Barrackpore, Dr. Utpal Kumar Sar, Executive Director, NFDB, Shri Partha Bandyopadhyay, Block Development Officer, Kakdwip. Dr. A. Panigrahi, Principal Scientist and Principal Investigator of the project, mentioned that P. indicus, although being non-SPF and without any selective breeding, has performed greatly in terms of growth and disease resistance under culture conditions. Moreover, to realize the tremendous potential of this shrimp, not only as an alternative species but to replace the exotic shrimp and avoid dependence on other countries for broodstock, popularization of the species among farmers is required. Dr. Utpal Kumar Sar, in his speech, emphasized popularization of indigenous fishes and shrimp species, and avoidance of dependence on foreign species. During, farmers-scientists interaction session, few progressive farmers discussed the pros and cons on P. indicus culture and expressed their willingness to culture in their farms. The programme was attended by 150 farmers from different coastal areas of West Bengal.

In the culture demonstration at Narayanmangallam (Kerala), quality seeds were stocked and reared with CIBA feed (35% protein) for 108 days from July 2016 and a production of 1.8 tons per ha was achieved harvested with a harvestable size of 50 to 60 count which could be sold @ Rs 340/kg of shrimp. The profitability and rate of return is good when we harvest early. In this farm the farmer had a profit margin of 2.2 lakh rupees/ ha/crop in 108 days of culture and they are quite happy with that. The harvest mela was organised on 8th Nov 2016 at Narayanmangallam.

The culture demonstration at Gudur, Andhra Pradesh was from July to Sept, 2016. Quality seeds were stocked and reared with CIBA feed (35% protein) for 72 days based on bio secured zero water exchange system. Ponds harvested had yielded up to 3350 kg/ha with the survival of 91 % and harvest size of 90-100 count in 72 DOC with an FCR of 1.2 and 140/-kg as the cost of production. The farm gate price received was Rs 220/- per kg.

To evaluate the potential and culture prospects of new indigenous species and add to the pool of diversified species, Fenneropenaeus indicus culture demonstration was undertaken at Danti – Umbharat farm, NAU, Navsari during the rabi season from July to Nov 2016. In this culture, production of up to 1533 kg/ha was achieved in a culture period of 89 days with ABW of 12.7 g.

Harvest and Farmers meet at Balasore, Odisha on 30th Nov 2016 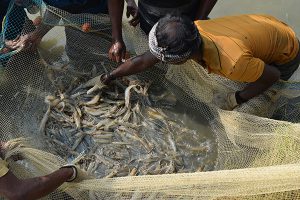 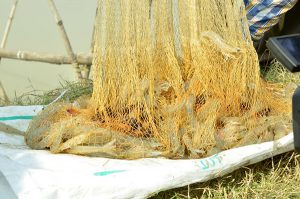 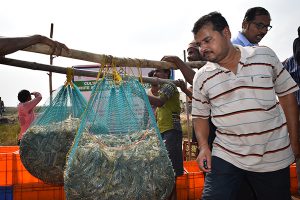 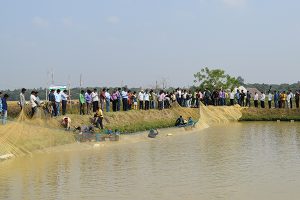 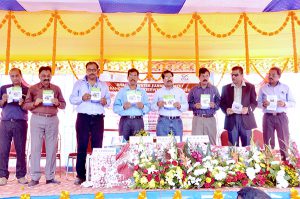 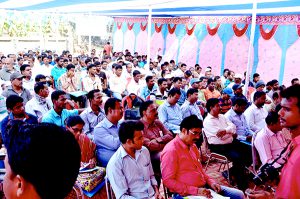 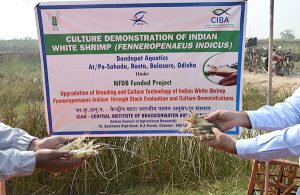 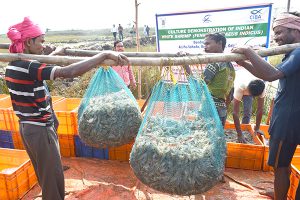 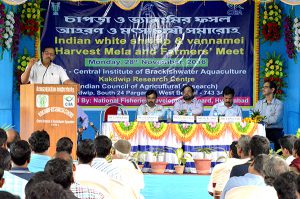 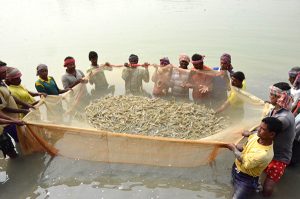 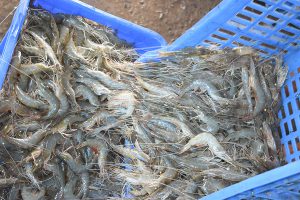 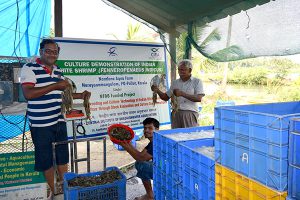