CIBA Foundation Day is being celebrated, commemorating the genesis of this Institute (Central Institute of Brackishwater Aquaculture, Indian Council of Agricultural Research) every year. This year this Day celebrated as an “Open Day” on 6th April 2015 at Muttukadu Experimental Station of CIBA, Muttukadu. On this day awareness was created among the school children about the environmentally safe and socially acceptable and sustainable aquaculture and its benefits for nutritional food security to the general public.

Around 400 school children (8th standard and above grades) from 10 schools in and around Muttukadu and Chennai city visited the campus in Muttukadu. They were shown with various facilities and research activities of the institute, viz., shrimp/fish seed production in the hatcheries, aqua-feed production, different aquacultured organisms, such as shrimps, fishes and crabs, and many other aspects related to brackishwater aquaculture.

The students have exposed to fish and shrimp hatcheries, and they released about 1 lakh baby shrimps and fishes in the nearby sea as a demonstration of sea ranching programme to replenish the natural population. They were also shown the video films on fisheries of India, brackish and coastal water aquaculture development, etc. The programme was attended by Mr Murugan, Panchayat president, Karikattu kuppam, Muttukadu, Mr Eraniyappan fish farmer and hatchery owner and Mr Nithyananthan sports-fishery entrepreneur.

They shared their experience and views on the importance of fisheries particularly brackishwater aquaculture as a means of income generation and to take up as an enterprise with the participating school children. The Director of CIBA Dr K.K. Vijayan emphasised on the tremendous scope of fish production through aquaculture and the greater avenues of economic development by adopting aquaculture. He also opined on the integrated approach for aqua-production through small scale family operation, government organisations, academic institutions and private organisations.

This programme was conducted as a part of ARYA (Attracting and Retaining Youth in Agriculture) initiative of THE HINDU and the Indian Council of Agricultural Research. 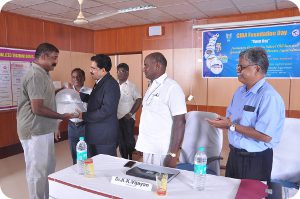