Central Institute of Brackishwater Aquaculture (CIBA), Chennai Signed an MOU with Mr Karuna Raju, shrimp farmer, Bapatla, Andhra Pradesh for the technology transfer on indigenous shrimp feed production on 20th June 2015. Dr T. Ravisankar, PS and SIC, ITMU, gave a brief about the MoU being signed for shrimp feed processing and production with Mr K. Karuna Raju who wishes to start the production for his own use and neighbouring farmers who may be interested. This MOU will be on non-exclusive mode, in the area of Shrimp feed technology, developed, tested and standardized by CIBA, Chennai. The area of indigenous feed technology is being given importance by farmers as vannamei feed cost is rising. This technology developed by CIBA emphasizes the use of locally available cost-effective raw materials resulting in a definite cost advantage to the entrepreneur and the shrimp farmer. Dr Ravisankar also referred about the humble beginning of ITMU in CIBA and how CIBA has moved to a new record of signing seven MoUs so far this year by June 2015 itself. He has specially mentioned the new thrust and efforts taken by the present Director and all Scientists, as TEAM-CIBA. 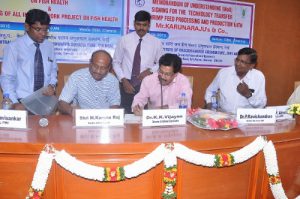 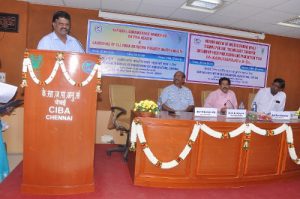