Launch of All India Network Project on Fish Health, 20-June-2015

Launch of All India Network Project on Fish Health was held at CIBA (ICAR), Chennai on June 20, 2015, The Member Secretary of the Coastal Aquaculture Authority (CAA), Dr P. Ravichandran was the chief guest of the function. Dr K.K. Vijayan, Director, CIBA presided over the meeting. Representing the brackishwater aquaculture sector, Mr Muthukaruppan, President, Society of Aquaculture Professionals, Mr Balasubramanian, General Secretary, Prawn farmers federation of India and Dr Panda, in-charge, MPEDA-RGCA Quarantine Facility, joined the occasion. The meeting was attended by10 partnering institutions (7 ICAR fisheries research institutes, CIFE-the Deemed University in Fisheries and 2 universities from West Bengal and Gujarat) of the All India Network Project on Fish Health, along with the scientists, and staff and research students of CIBA (ICAR). The programme was compared by Dr Saraswathy, Principal Scientist, who welcomed the Chief Guest, the Director CIBA, the dignitaries and the gathering. This was followed by the address of Dr Vijayan, Director CIBA, and he accentuated the importance of collective action by the different working groups for surmounting the challenges faced by the aqua-farmers and the aquaculture industry today. The director impressed upon the issues concerning:

Dr Alavandi, PS and HOD, AAHED, spoke briefly about the history of the project. He emphasized about the wide spectrum of unregulated products, need for a registration mechanism, about the proposal to bring out a compendium of aquaculture drugs, the need to generate sound database on trans-boundary diseases, and also about its screening and quarantine.

Dr. P. Ravichandran, the chief guest of the function congratulated CIBA on the launching of the network project and also on the new initiatives on public-private-partnerships, and on the proposed MoU’s with the private farmer. He Expressed his happiness on the faith shown by the stakeholders on CIBA’s R&D efforts, and technologies. Dr Ravichandran asked the gathering to introspect problems and issues of diseases confronted by the shrimp industry, particularly WSSV, which has been threatening the industry for over two decades. He threw light on the fact of the reports of emergence of newer diseases like white faeces disease, white patch disease, parasites like ERP, and called for research efforts from CIBA, partnering with farmers, to provide a scientific basis on these emerging syndromes, getting christened under different names. This would be of help to the regulatory agencies such as CAA and policymakers. Followed by Dr Ravichandran, formally launched the All India Network Project on Fish Health, at CIBA Chennai. 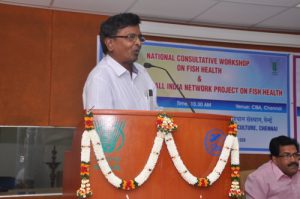 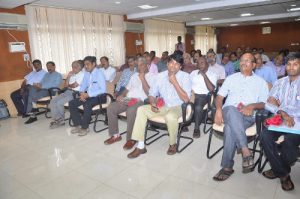 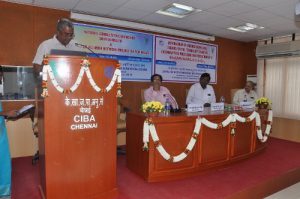 The felicitation address was offered by Dr Panda, in-charge, RGCA Quarantine Facility who stated the challenges associated with aquatic animal quarantine with respect to the capacity, and services and suggested the involvement and co-operation of stakeholders to provide feedback. He also shared his concerns on the drastic reduction in survival of postlarvae in the commercial hatcheries. He congratulated the client for the step taken by him to initiate setting of the feed production unit and emphasized the importance of PPP mode.

Mr. V. Balasubramanian, Secretary, Prawn Farmers Federation of India (PFFI) after offering his good wishes for the launch of the new logo and for the long partnership with CIBA, spoke of the recent disease problems like the white patch disease. He felt many of the issues were also associated with the non-certified inputs used by the farmers and called for the need for certification. He also requested CIBA to revive the program for certification/Harmonization of PCR testing facilities which assumes higher relevance today considering the current landscape of the shrimp farming sector where a larger number of diseases are being reported every day. He also expressed his concern on the antibiotic residues in the shrimp product, which is ironic because shrimp farmers are not practising antibiotic application. He has offered the full support of the farmers from his association, in the R&D efforts of CIBA. Dr M. Muralidhar, Principal Scientist, CIBA, proposed the vote of thanks.

Partners of the All India Network project attended the launch were: 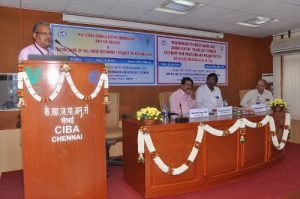 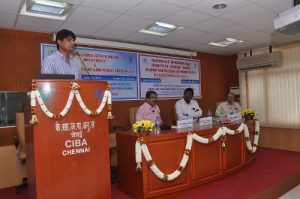