The ICAR – Central Institute of Brackishwater Aquaculture (ICAR-CIBA) Chennai has organised “Brackishwater Aqua Farm Innovators Day” as a part of the “World Food Day” celebration on 16th October 2015 to recognise the innovations developed by the farmers themselves by blending their own wisdom and experiences with the scientific principles.

Mr.T.Raghu Sekhar who hails from Nagayalanka village, Avanigadda (Mandal), in Krishna District of Andhra Pradesh is a farm innovator who has been experimenting farming of diversified species like Mud crab (Scylla spp.) and fin fishes, such as, Pearlspot (Etroplus suratensis, Mullet (Mugil spp.) and Asian seabass (Lates calcarifer) while most of the farmers do farming of high valued species like the western white shrimp (Penaeus vannamei). He has been adopting an innovative system of cage culture in the open waters; has been successful in getting good production and testifies that the fish culture system is economically viable. He has been also involving the tribal people living in the coastal block of Nagayalanka in open water fish farming and Mudcrab fattening through that they earn their livelihood.

Similarly, Mr Anil Sasidharan from Ernakulum, Kerala who had left his lucrative white collar job to venture into the farming has been adopting organic shrimp farming to produce shrimps using organic feeds. He started a company M/s. Jass Ventures and formed an organic shrimp producer group. He produced organic feed with the help of CIBA and supplied organic feeds to farmers. He could get certification for the organic shrimps and able to get 20% extra premium price.

It is important to bring convergence between the informal innovations of these innovators and formal research systems. Recognizing the novel systems of farming experimented by these two innovators, the CIBA, under the leadership of Dr.K.K.Vijayan, Director of the Institute, has been collaborating with them by providing technological backup and supplying feeds for their farming.

Shri.E.Mariappan, Director-News, Doordharsan Kendra, Chennai, the Chief Guest of the function, felicitated the farm innovators and opined that such grass root level farmer innovators need to be identified and facilitated to upscale their innovations so that their hard efforts get rewarded and recognized. The programme was coordinated by Dr.V.S.Chandrsekaran and Dr.M.Kumaran, Principal Scientists under the guidance of Dr.C.Gopal, Director-in-Charge, CIBA. 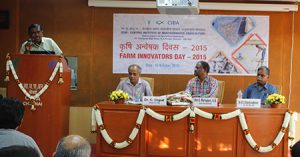 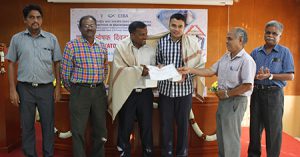