The ICAR-Central Institute of Brackishwater Aquaculture (CIBA), Chennai has developed low fish meal based organic feed for the culture of black tiger shrimp, Penaeus monodon through extensive research and field testing. CIBA has entered into an agreement with M/S. Jass Venture Private Limited for the transfer of this green technology for the culture of organic shrimp. The organic feed has been produced at the CIBA feed mill, which is certified for processing and production of organic shrimp feed by the certifying body, INDOCERT, Kerala in 2013. This is the only certified feed mill for producing organic shrimp feed in India. The organic shrimp feed comprising of different grades, viz., Pre-starter, Starter, Grower and Finisher, were also tested by M/S. Jass Ventures Private Limited in Ernakulum, Alleppey and Thrissur districts of Kerala, with 25 farmers having the total farm area of about 50 hectares. Having sighted the successful demonstration and the potential for organic shrimp feed M/S Jass Venture Private Limited came forward to seek the technology from CIBA and the MOU was signed between CIBA and Jass Ventures Private Limited on 29th November 2015, in the presence of Dr A. K. Singh, Deputy Director General (Extension & Fisheries), ICAR and Dr S.D. Singh, ADG (Fisheries), ICAR. The Director of CIBA Dr K.K. Vijayan highlighted the significance of this unique technology transfer involving young entrepreneur, Mr Anil Sasidharan and opined that this type of technology partnership will be a model for the educated youth of the country who wish to take up agriculture and allied activities in future. This technology transfer programme could become a success because of the teamwork of CIBA scientists from nutrition and biology groups with able support from the Institute Technology Management Unit (ITMU). Dr K. Ambasankar, Principal scientist and leader of this program highlighted that the organic feed produced by the M/S. Jass Venture Private Limited, at their new feed mill facility, will be available to the farmers shortly and there is a great scope for increasing the organic shrimp aquaculture in India, particularly in the state of Kerala. The feed developed for the culture of organic shrimp was named as Shrimp Green FeedBT. 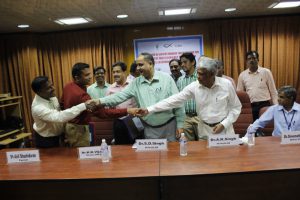 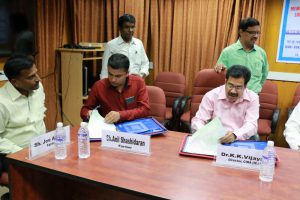 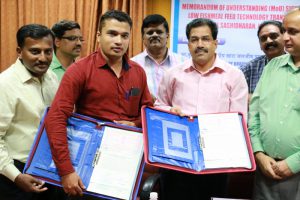