Central Institute of Brackishwater Aquaculture, Chennai has achieved a major breakthrough in artificially breeding the milkfish (Chanos chanos), locally known as ‘Paal Kendai’ or ‘Paal Meen’ in captivity for the first time in the country. Milkfish has the ability to grow in brackishwater, seawater and freshwater ponds and lakes. This fish consumes low protein pellet feed and grows up to 500 g size in 6 months. This is a boon for small and marginal farmers who can grow the fish at a low cost. Milkfish fetches Rs. 120-150/kg in the local market while the production cost is only Rs. 50-60/kg.

In the fish hatchery of the Experimental Research Station of CIBA located at Muttukadu near Chennai, the male and female adult milkfish were reared in cement tanks for more than 10 years. While the milkfish attains natural maturity, breeding and spawning in the open ocean, maintaining the broodstock (parent fishes), inducing them to mature and breed further were technically challenging tasks. These fish were bred by administering calculated doses of the permitted hormone. The fertilized eggs obtained were hatched and reared to the fingerling stage, which is further suitable for nursery rearing and farming. The CIBA research team, after making tireless efforts, have achieved this for the first time in India.

Being a low-cost fish the milkfish can cater to the need of the common man in Indian domestic markets as a suitable source of animal protein and for nutritional requirements of human food in general. The small-sized milkfish is also being used as a preferred live bait for tuna fishing industry. The milkfish being a herbivore, with low production cost, can form an ideal alternate species for shrimp farmers. Representatives from the industry, fish farmers and fisheries scientists have welcomed this breakthrough. Aditya Fish Hatchery (AFC), Kakinada, Andhra Pradesh has been a knowledge partner with CIBA in milkfish breeding programme (see MOU between CIBA & AFC ). 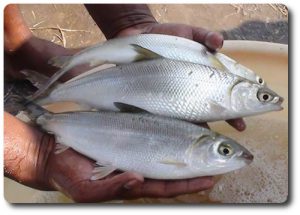