ICAR-CIBA conducted a national webinar on “Biofloc based aquaculture: a way forward”   to disseminate the science, technology and practice behind it to the thousands of farmers and young start-up entrepreneurs who were highly excited about this new technology, and wanted to enter into the biofloc farming.

In biofloc nutrient-rich microbial biomass serves as a natural in situ feed for the farmed species and improves nutrient recovery and production economics, further the microbial consortium facilitates in situ bioremediation, cleaning the nitrogenous wastes in the rearing water and get converted into nutrient-rich microbial biomass, and the cycle is repeated. This system needs control over the rearing system, to keep the components such as Carbon: Nitrogen ratios, aeration, power back up, microbes, planktons and other microeukaryotes, on a biological balance. When keeping all this factors in a balance mode, BFT has been perceived as the most sought after GREEN TECHNOLOGY for sustainable seafood production.

This digital event was inaugurated by Dr. Joykrushna Jena, DDG (Fisheries), ICAR. In his address he impressed upon the immense potential of the biofloc technology in  Indian aquaculture sector, not only in brackishwater shrimp aquaculture sector, but also  in freshwater fish farming, enabling the hundreds of fish famers from across  India.

Dr. CP Balsubramanian, Head Of Crustaecan Culture division, flagged the proactive involvement of the division in developing front end technologies for the benefit of the brackishwater aquaculture sector, and advised the farmers and entrepreneurs to understand the technology before venturing into it, and he promised the technology support of CIBA for the same.

Dr. K.K. Vijayan, Director, CIBA, in his address wished all participant for their interest in the biofolc technology,  highlighted the need for scientific understanding and approach on this novel technology to suitably customize to the Indian techno economic conditions. He said that it is the responsibility of the scientific community to expose the positive side and negative side of this highly sought technology with adequate scientific backup.

As a part of the virtual event, ‘CIBAFLOC’,  a ready made inoculum developed by ICAR-CIBA for the development and maintenance of biofloc, was released. The technology was transferred to the industrial partner M/s Salem Microbes Pvt Ltd  on a virtual mode by DDG, fisheries.  Dr. J. K. Jena complimented M/S Salem Microbes for recognizing the potential of ‘CIBAFLOC’ developed by CIBA for the benefit of all those who are venturing into biofloc based farming of shellfish and finfish in India.   M/s Salem Microbes Pvt Ltd is a leader in microbial products and has their presence in the Indian market for the past two decades, presently diversifying into aquaculture.  Mr. D. Ramesh Kumar, the CEO, M/S Salem Microbes, shared his happiness for partnering with CIBA for the scaling up of ‘CIBAFLOC’, and he assured that the product would  benefit the biofloc farmers.

In the technical session, world-renowned biofloc man from Israel, Prof. Yoram Avnimelech, (Emeritus), who took the technology to many countries worldwide,  enlightened the audience about the significance of the technology the recent developments around the world. Dr. Akshaya Panigrahi, Principal Scientist and PI of the project that developed this consortium briefed the BFT in relevance to shrimp farming and highlights of CIBAFLOC and its science with the track of research on it. Progressive entrepreneurs like Mr Suryakumar, CEO, Hi-Tide Sea farm, Mr. M. A Khan, NNFC,  Delhi,  Mr Anil Ghanekar, and Eco Secure Systems, Chennai and Mr. Anjan Dandapat, Jagannath Aqua,  Odisha shared practical experiences in relevance to the BFT.  Dr. K.P. Kumaraguru vasagam, Principal Scientist, and Dr. Sujeet Kumar, Senior Scientist from CIBA, briefed the nutritional and microbial aspects of the biofloc, respectively.

More than 2800 participants of different capacities across the country registered for the event and several more joined through Youtube and other social media platforms.  Dr. A Panigrahi, Principal Scientist, along with his colleagues from Crustacean culture Division coordinated the entire event and responded to the participants’ queries.  Dr. P.K. Patil, ITMU CIBA, facilitated the transfer of technology by signing an MoU, and the webinar concluded with a vote of thanks by Dr. Shyne Anand, Scientist, CIBA. 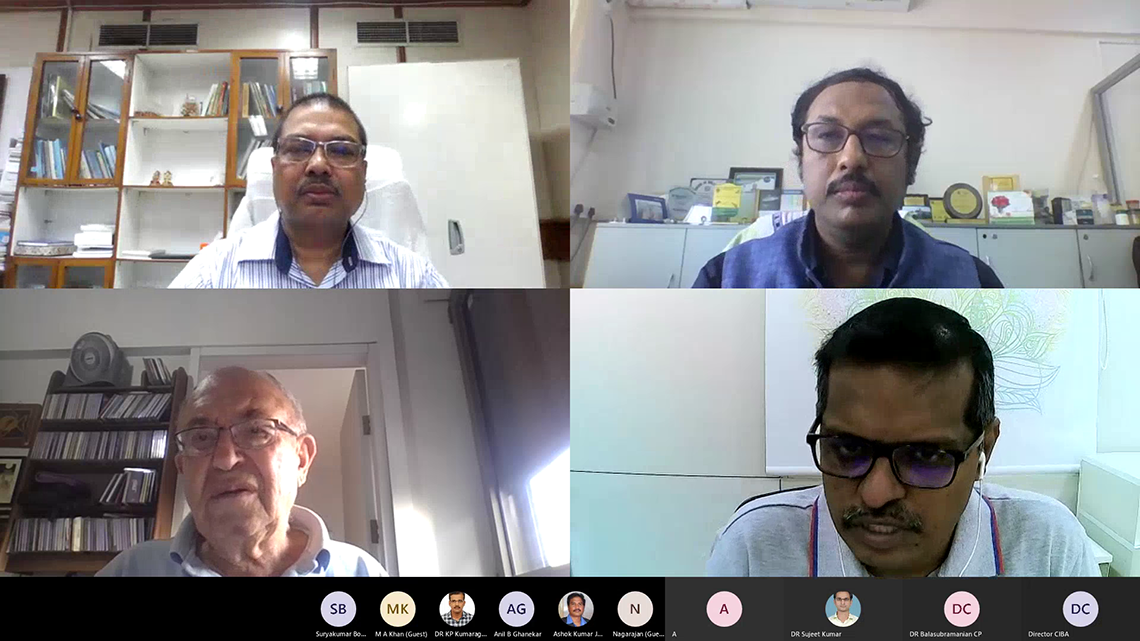 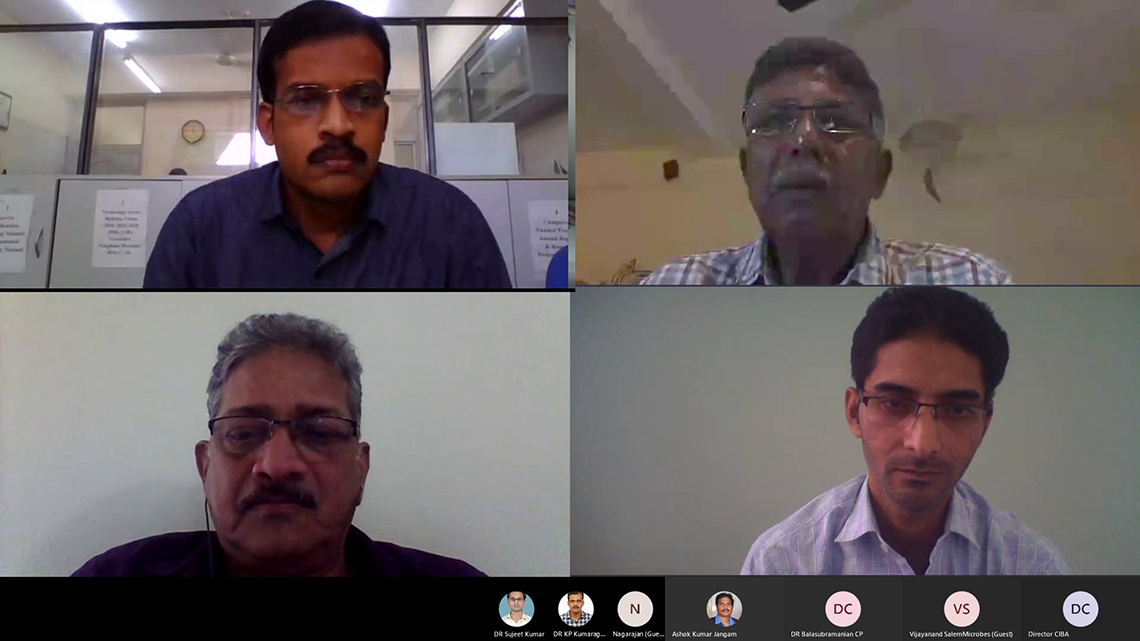 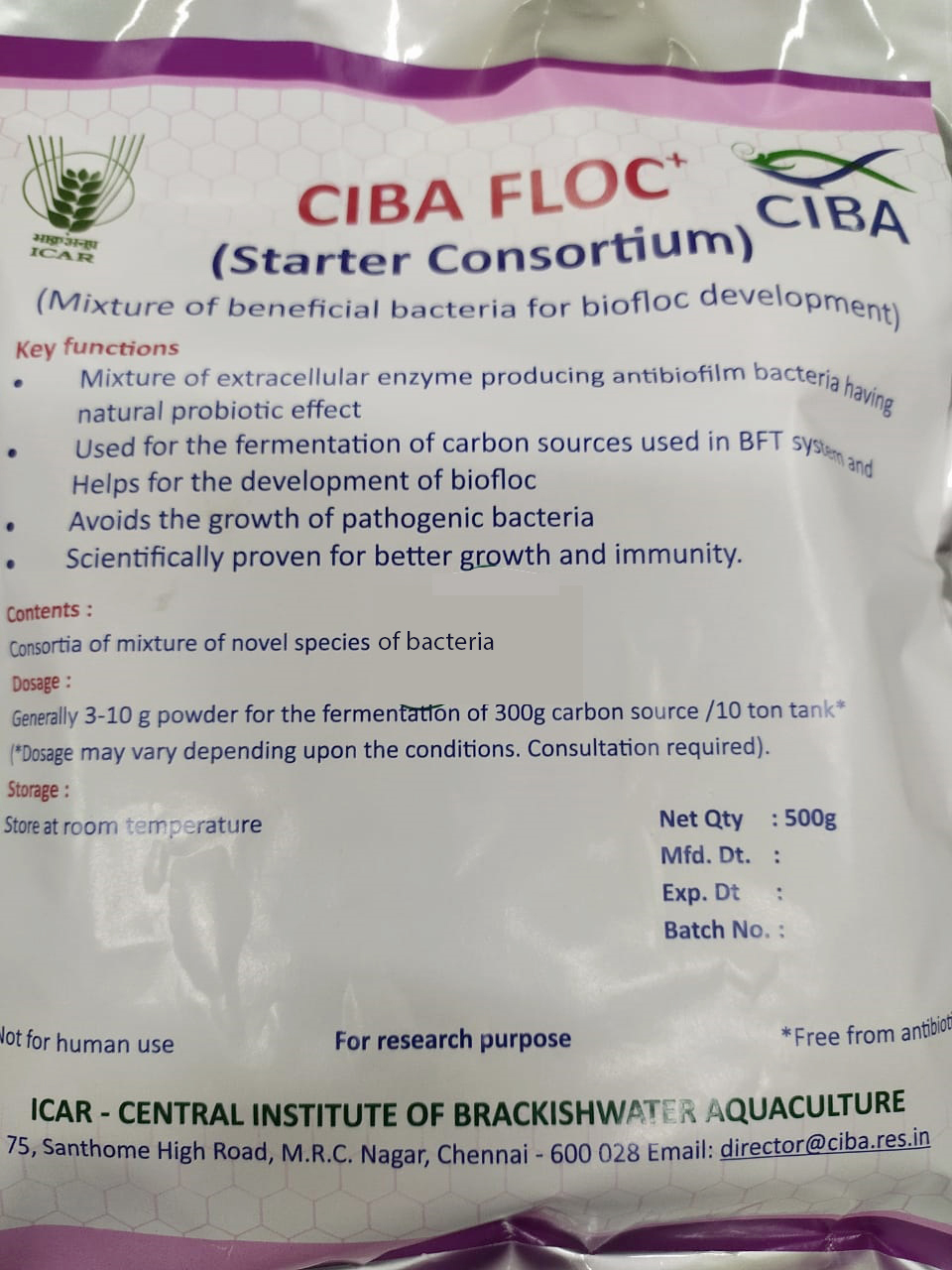