ICAR-CIBA announced the indigenous hatchery technology for grey mullet, which can drive the blue revolution initiatives by Govt. of India

In a major breakthrough, the Central Institute of Brackishwater Aquaculture (CIBA) has successfully bred the Grey Mullet (Madavai), a high-valued commercial brackishwater fish, for the first time in the country in line with Government of India’s push on increasing fish production under blue revolution mission. Grey mullets are commonly known as “Madavai” in Tamil, “Thirutha” in Malayalam, “Kathiparega or Mala” in Telugu.  Grey mullets are distributed in tropical and sub-tropical waters, a fastest growing species among Mullets, belongs to the family Mugilidae, a euryhaline fish able to grow in fresh, brackish and marine habitats. It is an omnivore feed primarily on detritus, benthic micro-algae are efficient converters of primary productivity into quality fish protein. Due to the texture, taste and free of spines, consumer preference is high, and fetches good market price, which is in the range of Rs.350 to Rs.500/kg. Faster growth rates and omnivorous feeding habit, acceptance of formulated pellet feed makes it a preferred fish of brackishwater aquafarmers. It is an ideal candidate species for polyculture and Integrated Multiprophic Aquaculture systems. A production up to 3.5-4 tonnes per ha/crop can be achieved at a benefit cost ratio of about 1.9.

In India, attempts to develop captive breeding technology for grey mullet were initiated in 1980’s, wherein maturation, breeding and larval rearing cycle were not been successful and it remained as a challenge. The primary reason which makes the captive breeding extremely challenging is related to its short reproductive period limited to few weeks during the monsoon season and reproductive dysfunctions in captivity. Further, its single spawning character further constrained the efforts in breeding. Considering its significance for brackishwater aquaculture, CIBA has been giving greater impetus in the breeding of grey mullet since 2015, giving special focus on developing a captive brood stock and breeding. Some of the enterprising mullet farmers form Ernakulam and shellfish hatcheries supported the efforts of breeding, by extending their field facilities, which helped the breeding initiatives.  As a result of concerted efforts, successful breeding and larval production of M. cephalus was achieved using pond reared brood stock in 2016-17. CIBA has consecutively produced hatchery reared mullet fingerlings in the subsequent years and the third batch of hatchery reared grey mullet fingerlings produced in December 2020-January 2021 season. Formulation of indigenous pellet feeds for the brood stock, larvae, nursery and growout farming by the nutrition unit of CIBA has also contributed for the success in developing the indigenous hatchery technology.

The success with this long-waited breeding technology was officially announced on 28th Jan, 2021 by CIBA in a stakeholder meet organized at Muttukadu Experimental Station, Chennai in the presence of Dr. Joykrushna Jena, Deputy Director General (Fisheries) of Indian Council of Agricultural Research (ICAR), New Delhi, Dr M Vijayakumaran, former Principal Scientist of CMFRI, RAC member, Mr. Ramachandra Raju and Mr. S. Sathish Kumar, IMC members of CIBA and Mrs. Oliver Rachael, Deputy Director, Department of Fisheries, Tamil Nadu. As a part of this event, the first batch of hatchery produced grey mullet seeds, and species specific feeds (CephalusPlus brood stock and nursery feeds) for grey mullet were distributed to the enterprising farmers from Andhra Pradesh, Tamil Nadu and Kerala. The seeds will be raised in their respective farms and developed as F1 broodstock, which would be again brought back to CIBA hatchery for further breeding and seed production. These initiatives towards the captive broodstock development may help in increasing the wider breeding window of grey mullet and the process of induced maturation and breeding less challenging.

Dr J.K. Jena, Deputy Director General (Fy.), ICAR presided over the function by on-line and congratulated the team CIBA on this milestone. He complimented that CIBA‘s recent efforts towards species diversification with species such as Asian seabass, milkfish, grey mullet, which is commendable effort towards for sustainable development of the dynamic brackishwater aquaculture sector. He suggested positive collaboration in the transfer the technology with the state government agencies and other stakeholders along with establishment of brood-banks under PMMSY scheme.

In his presidential address, Dr. K.K. Vijayan, Director, ICAR-CIBA emphasized that finfish breeding technology require scientific backstopping in form of breeding technology, feed development, fish health support and it is the team effort helped in  closing the life cycle of grey mullet after decades of research. He highlighted the importance of raising hatchery bred grey mullet juveniles into F1 broodstock to counter the biological challenge of single narrow breeding window. He further emphasized in the scope of promoting brackishwater finfish farming in the country with the novel hatchery and farming technologies for the resilient, herbivorous species such as milkfish and grey mullet, which have a ready market demand. Dr. M. Kailasam, Principal Scientist and Head-in-charge Finfish culture division explained that grey mullet farming is remunerative because of high demand in domestic market with a price tag of Rs 400-600/kg. CIBA’s initiatives and breeding technologies have led to introduction of one more candidate species for brackishwater aquaculture diversification and sustainability. He highlighted the versatility of the fish that it can be farmed in diverse farming systems such as mono culture, poly culture and integrated multiprophic aquaculture mode (IMTA), also can be farmed in brackish, freshwater and marine conditions.

Dr. M. Vijayakumaran, member of research advisory committee of CIBA stressed on importance of environmental factors such as pond health and ecosystem factors, in the farming process to get better production.  The importance of quality feed with efficient feed conversion ratio was emphasized by Mr. Ramachandra Raju, IMC member from Andhra Pradesh. Mr. S. Sathish Kumar, IMC member from Tamil nadu expressed the hope that grey mullet farming could be customised to suit small and marginal farmers from the coastal areas as a livelihood activity. Mrs. Rachael, JD fisheries from Tamil nadu Fisheries Department appreciated CIBA’s effort in the species diversification, in particular in the development of  new technologies for seed production and species-specific feed development for grey mullet. Dr. N.Kalaimani, Former Principal Scientist & Secretary, SCAFI said that though breeding of grey mullet was attempted in the previous years but hatchery produced seed has been given to the farmer for first time, which would help in propagating the farming technology of this important species. Speaking on the occasion, Dr. K. Ambasankar, SIC, nutrition group informed that CIBA has developed  species specific formulated feed for larval, nursery, grow out and broodstock diets for grey mullet farming. The progressive farmers who have received the hatchery produced seed, Mr. A.M. Nizar and Mr. Purushothaman Thayambath from Kerala, Mr. T. Raghu Shekhar from Andhra Pradesh; Mr. and M. Sathya from Tamil Nadu, admired the efforts taken by the team CIBA and opined that and development of multi-species finfish hatcheries is the need of the hour to meet the finfish seed requirements for farming. The innovative aquafarmers who received the hatchery produced grey mullet seed were happy with the new technology and expressed their happiness in this new addition in the species farming basket, ‘we expect it will bring significant transformation in the brackishwater sector,’ the farmers added during the interaction. 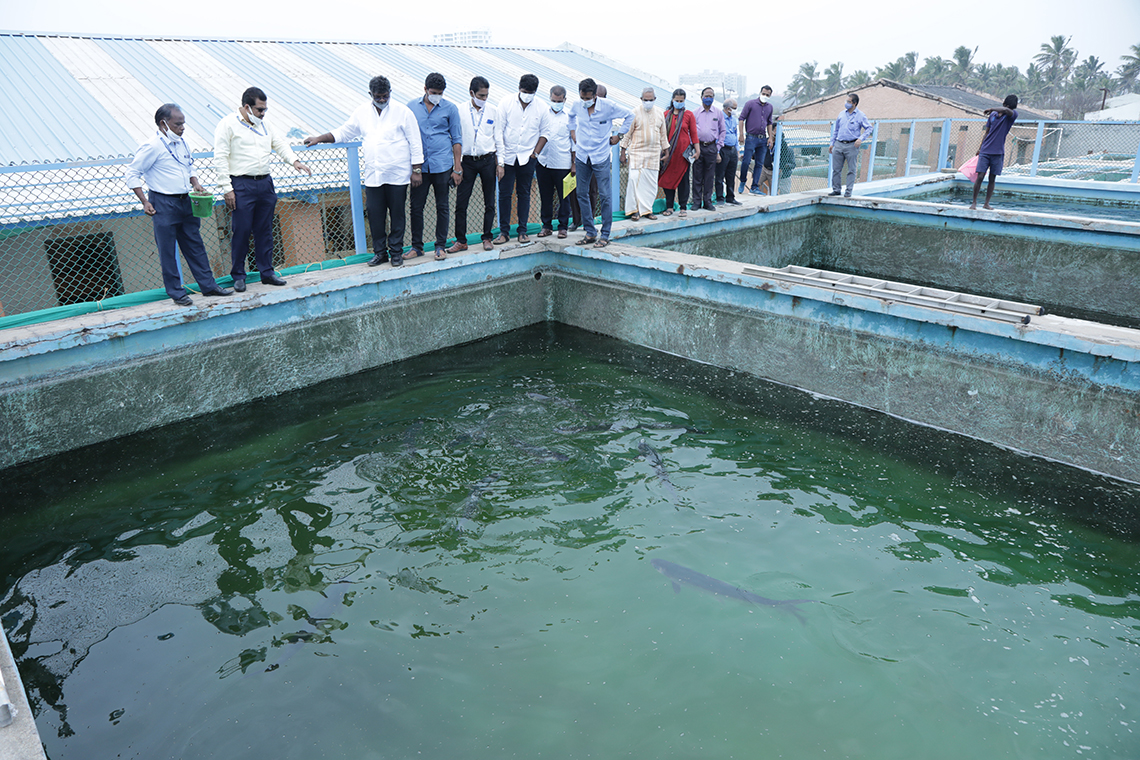 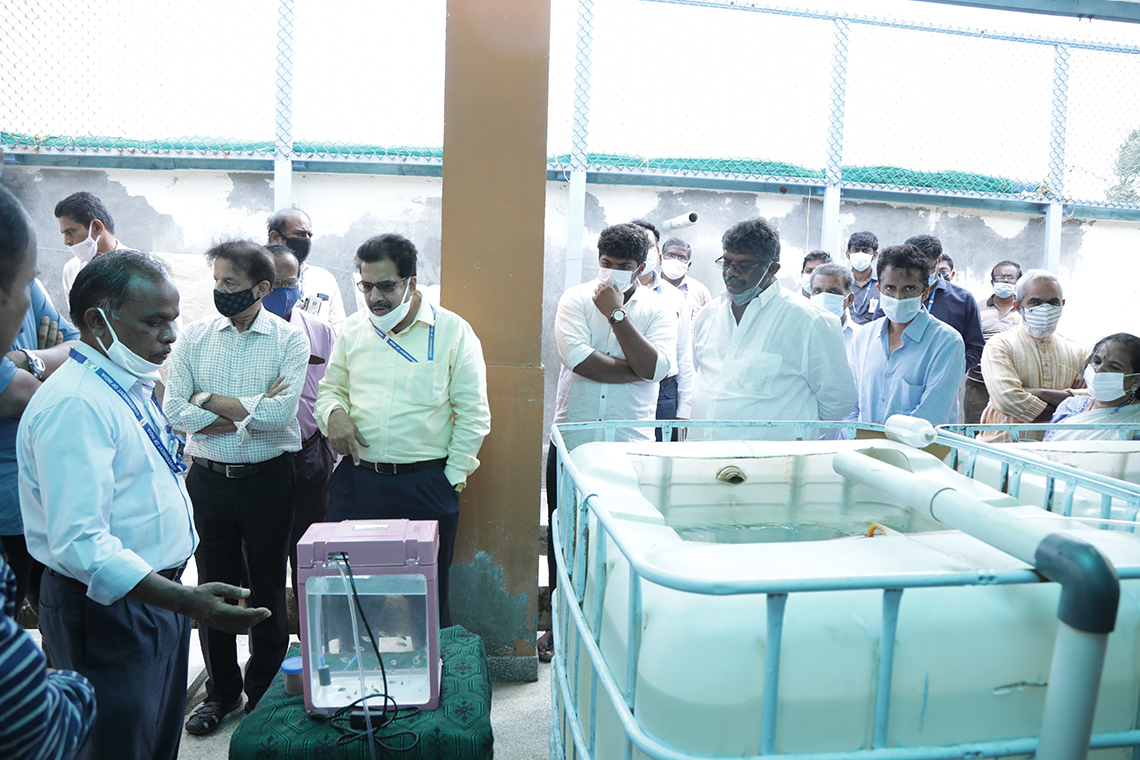 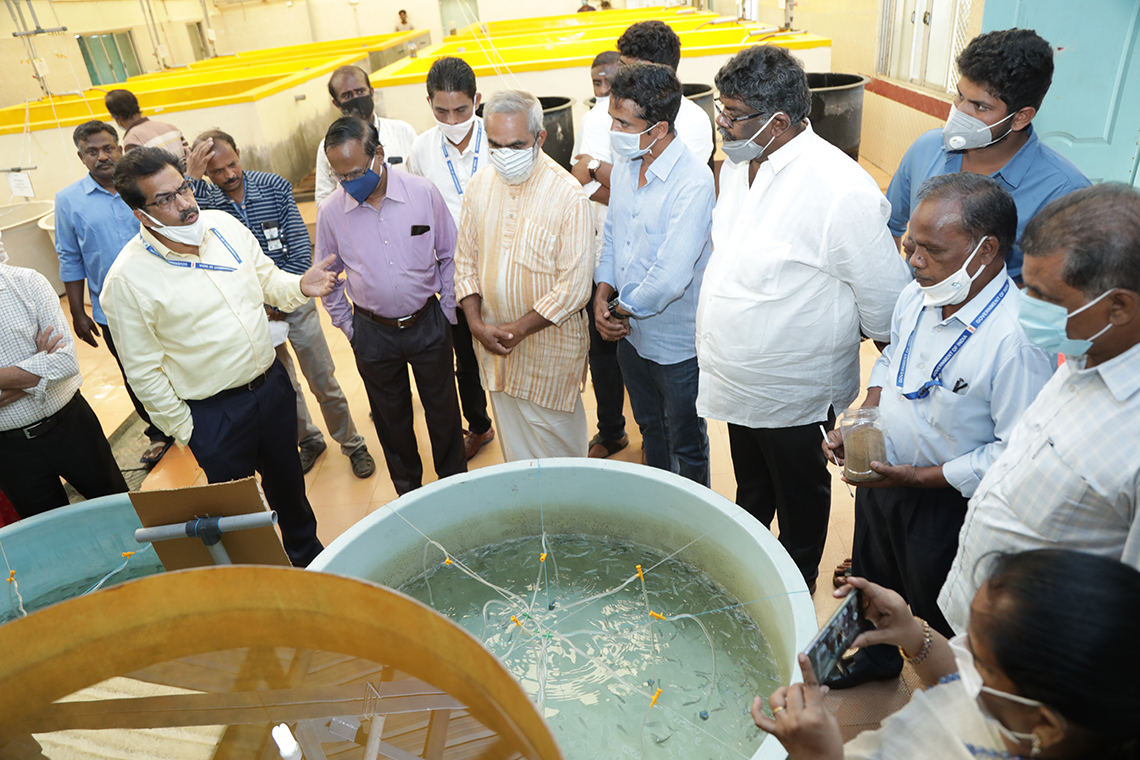 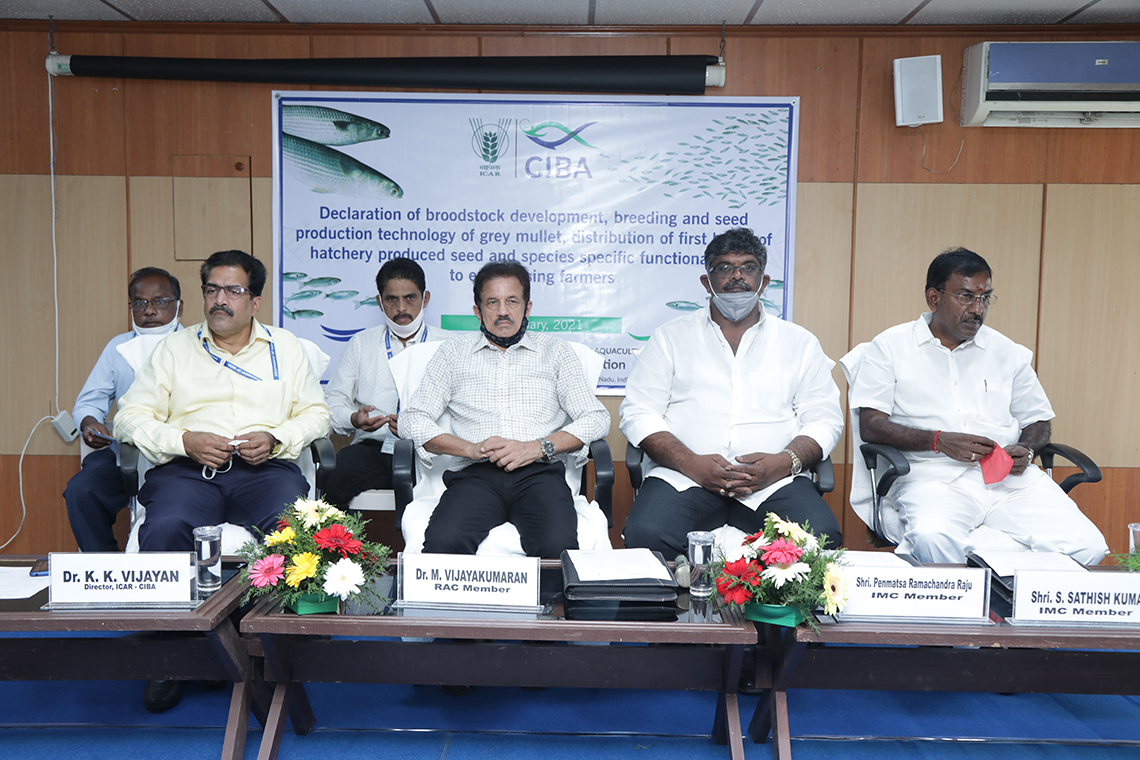 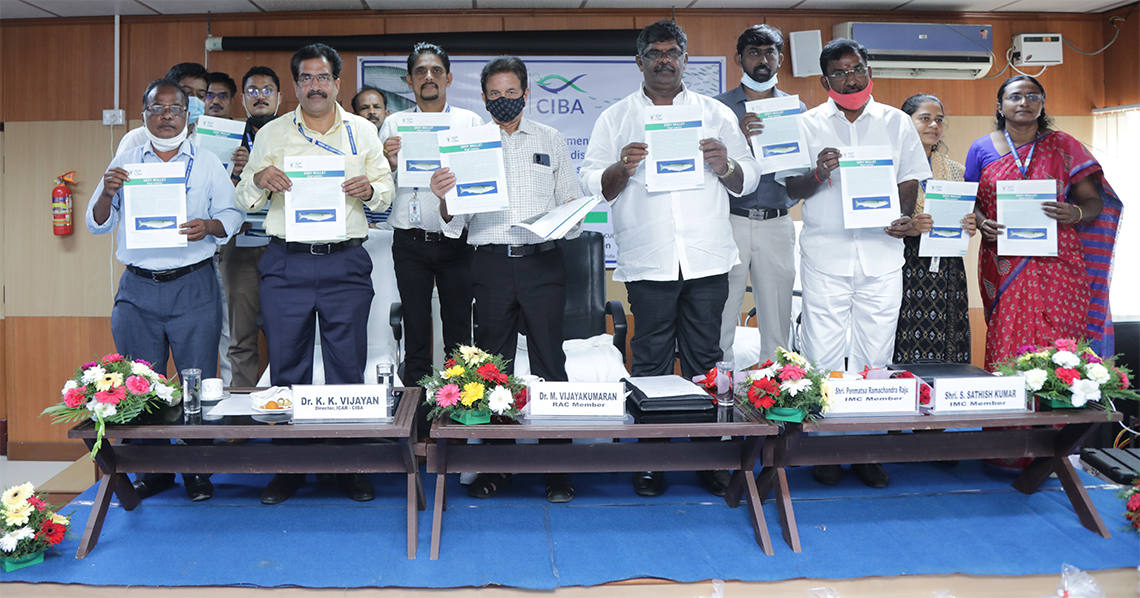 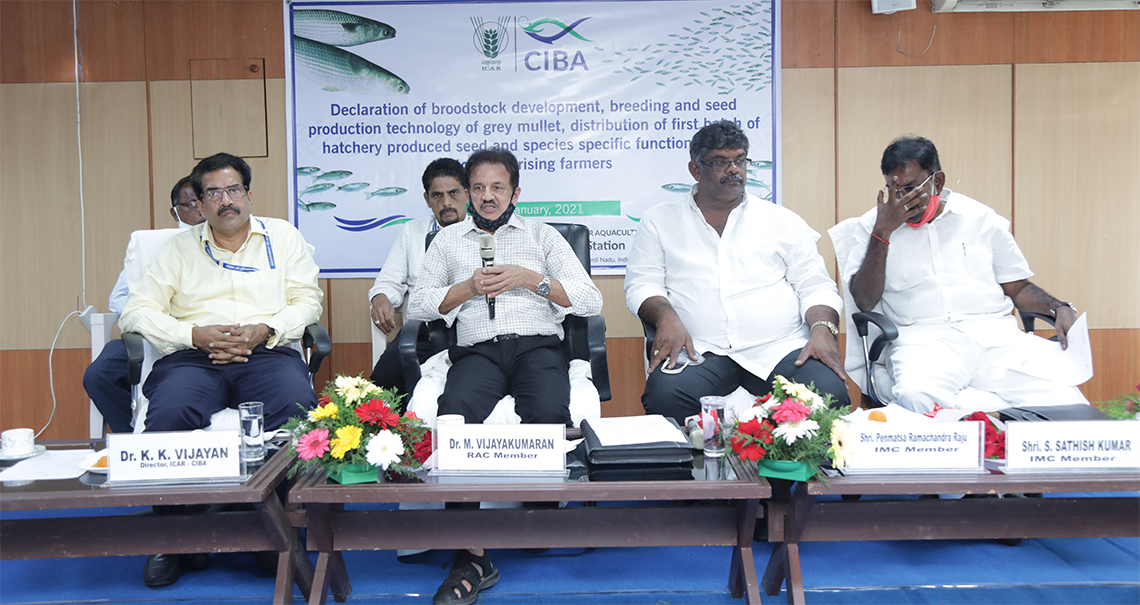 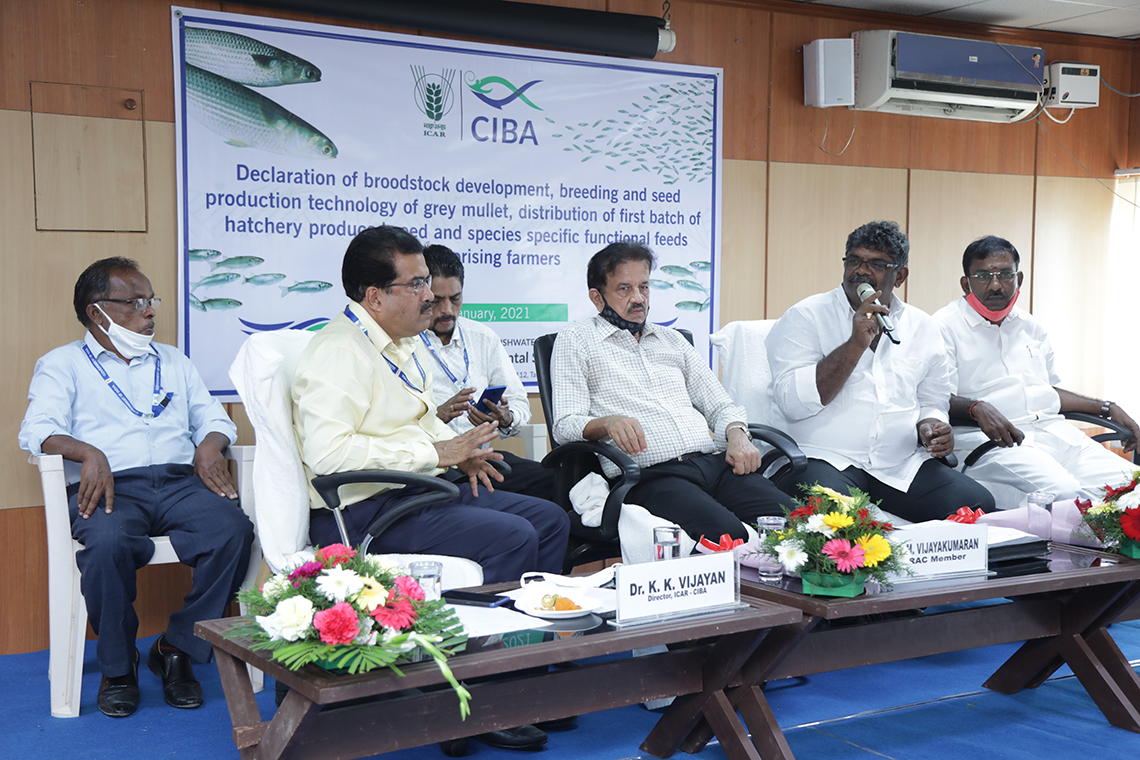 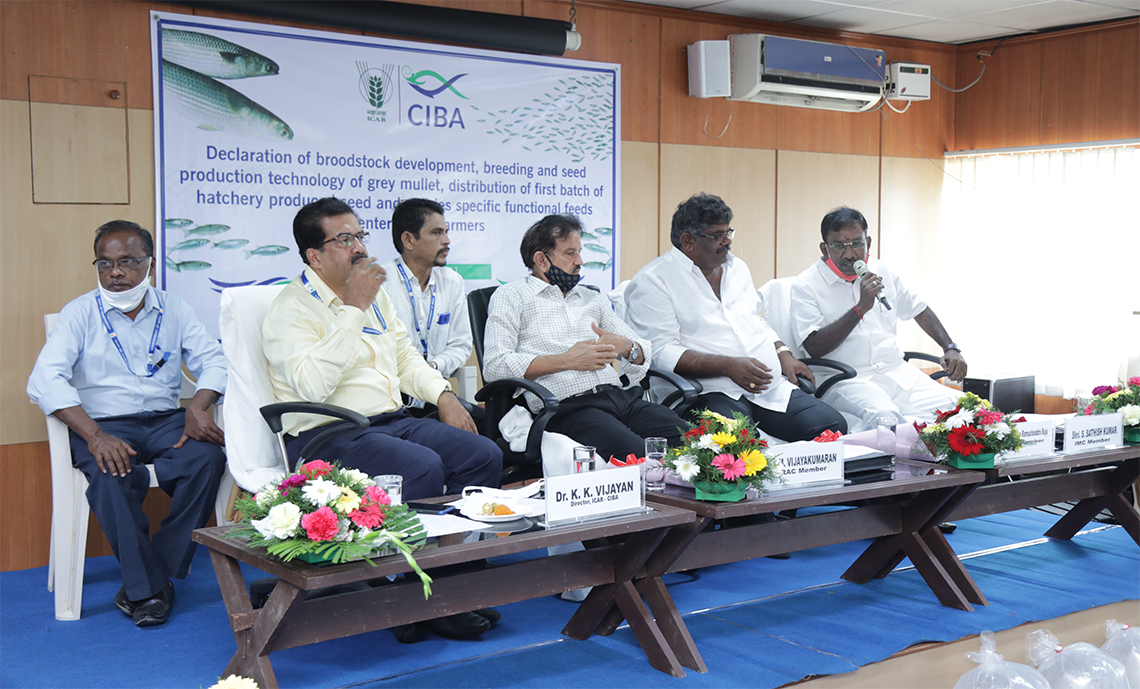 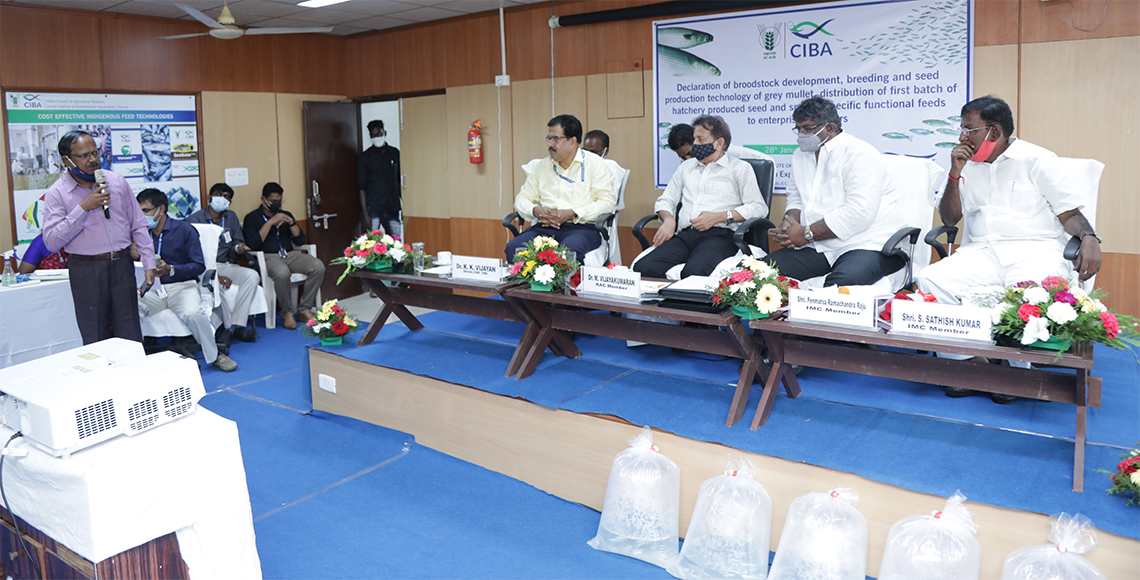 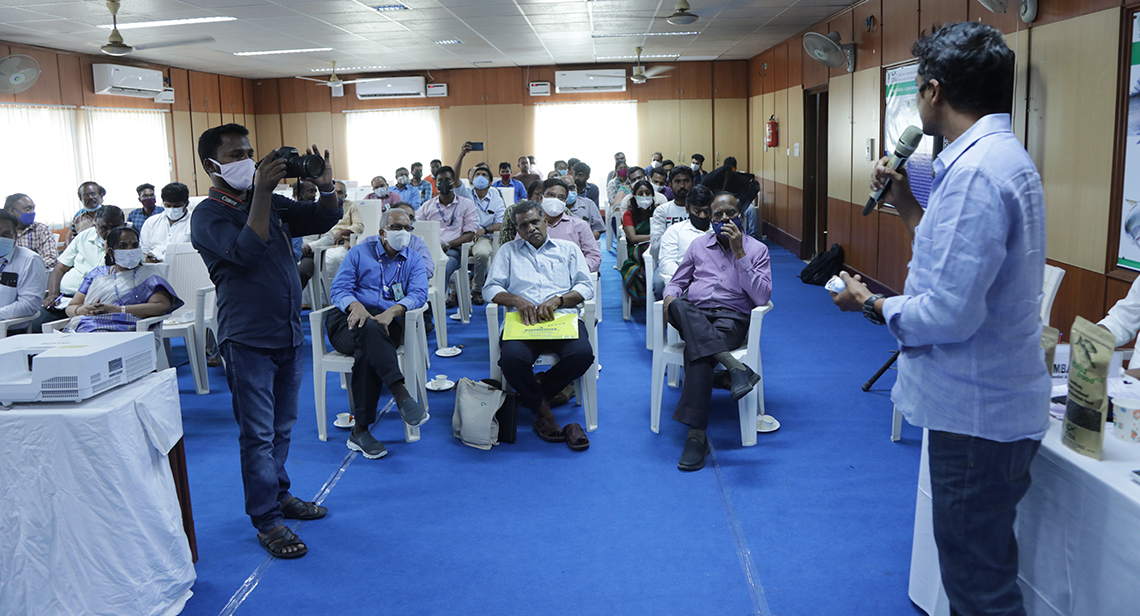 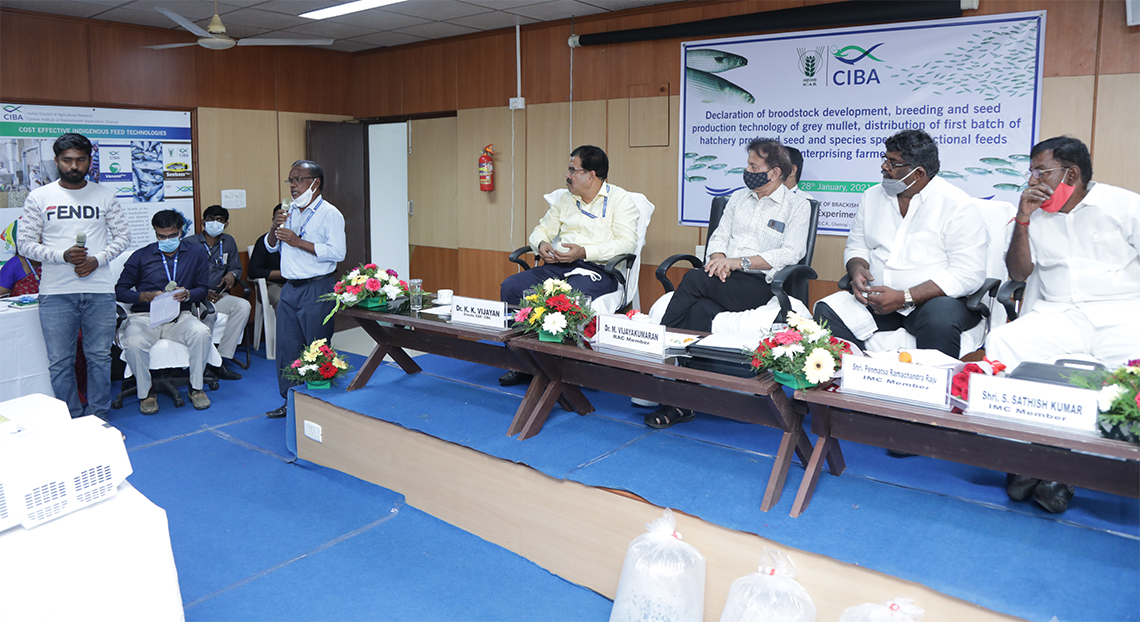 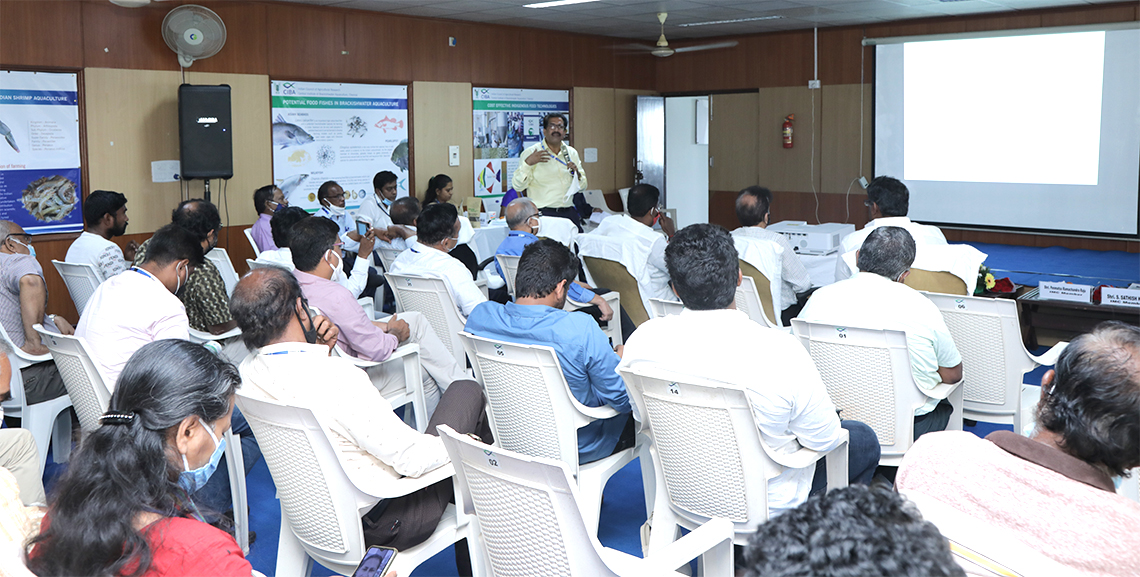 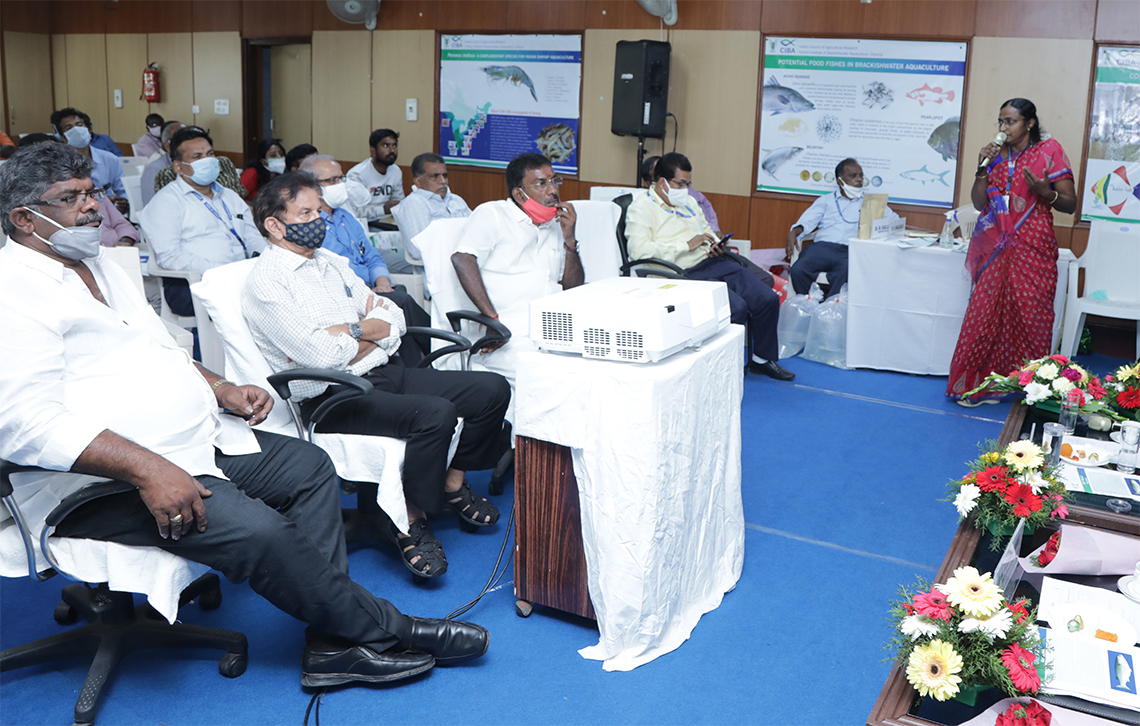